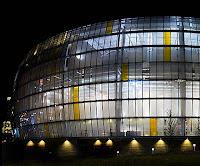 So yesterday, The Pitch's Justin Kendall posted a report that the NBA's New Orleans Hornets had met their attendance thresholds, thus guaranteeing they cannot breach their lease. This is news because every year, at least a couple NBA or NHL franchises let their local governments (read: landlords) know that Kansas City has a spiffy new arena, and it's ready for a team, and by golly, attendance hasn't been so good lately and oh I could use some new suites and other "revenue streams", and Kansas City has those things, hint hint.

It really got me thinking:

What if the Sprint Center is the focal point of massive sports ownership collusion?

The arena is run by AEG, which owns the NHL's LA Kings and has an interest in the NBA's LA Lakers. They obviously have the ears of the other owners.

What if AEG said, "All right, people. Check this out--we put an arena construction issue to a vote in Kansas City."

"But here's the great part--the citizens of KC will barely be taxed at all! We'll fund it with a hotel and rental car tax so TOURISTS can pay for the arena! In fact, that's how we'll sell it."

"Think about it--it has neither a hockey nor a basketball team, but an arena could house either one. It's also a big enough city that an outsider could believe that, conceivably, a franchise could draw well enough to be supported there. For crissakes, we have a basketball team in Salt Lake City!"

Where are you going with this?

"We get the arena built. For a good ten years, those of us who need a few more skyboxes, or concession stands, or hell, a whole damn new arena can hold our fanbase hostage. Fix our shit or we leave."

Brilliant! And none of us really ever have to leave! Sweet, sweet leverage!

"Yep--everyone wins. You get your new amenities, your fans keep their teams, and Kansas City gets Elton John, Garth Brooks, and Nickelback."

After ten years when the arena is not so state-of-the-art...?

"We do it again. Vegas, baby."
UPDATE: Apparently the latest team to make us their patsy is the Indiana Pacers. (/nod Justin Kendall @ the Pitch)
UPDATE: Now it's the Columbus Blue Jackets. (/nod David Martin @ Pitch). It never ends.
Posted by JJSKCK at Friday, March 13, 2009

Do you think AEG makes more or less money with an "anchor" tenant?

I think it depends on how much money the other owners have promised to contribute to AEG to maintain their little blackmail haven at 14th and Grand. :)

Really, who knows? Right now, both leagues are in DIRE financial straits, so the current numbers are pretty skewed. My personal opinion is that we don't have the interest or population base to support another franchise.

From an interest standpoint, I can't see us averaging 16,000+ at $35 average ticket price for 40 home hockey dates. No one wanted the NBA back until the arena was built. Population-wise we would be, by a significant margin, the smallest metro area to have 3 major league sports.

My gut says AEG is doing just fine with their Coldplays and Polices.