Owen @ Fat City put up a great list the other day about the 10 liquors you should have in your house bar—check it out if you’ve ever wanted to get your own little watering hole started.

The list mentions Most Wanted Vodka, a premium vodka at a not-so-premium price. It is distilled in Atchison County, KS (seriously) and it is probably the best value in vodka you can get in the KC area. I am by no means an expert on spirits, but I have tasted several premium brands (Belvedere and Grey Goose among them) and they’ve got nothing on Most Wanted. 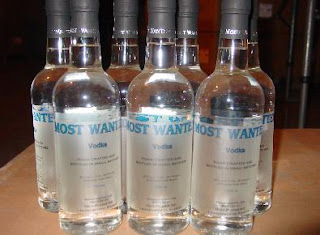 Oh--and Most Wanted’s price is more in line with, say, Smirnoff’s regular-quality vodka.

Now ask yourself the same question, except the Belvedere costs twice as much.

This is the concept of premium pricing at work. The fact that Belvedere costs more gives the impression that it is SUPERIOR, even though it probably isn't.

Okay; that’s a comparison of two different vodkas, which makes preferences subjective. For objectivity's sake, a study recently showed two groups that purchased the same bottle of wine. One group paid something like $7 per bottle, the other paid $30. The group paying $30 was much more satisfied with their wine and much less critical of its quality.

On one hand it sounds crazy, but on the other it makes total sense. We want to feel justified in our decision to fork over more money, even when it's not justified at all.

This is not to say that qualitative aspects don’t come into play on some products…but which products are they?

When does paying twice as much for a DVD player make sense?

Or a polo shirt?

Or a set of golf clubs?

How do you know?

What do you readers pay extra for, and why?
Posted by JJSKCK at Wednesday, March 04, 2009

Most Wanted vodka is great. Most Wanted's High Plains Kansas whiskey is another story. Like syrup. I got plowed on it one night, spilled a little on the floor, passed out in it and was stuck for three days.

Yeah, I think it was Consumer Reports or some other non-biased entity that did a blind taste test of vodkas, and the far and away winner was Smirnoff. Even among people who were self-proclaimed Grey Goose/Ketel One/whatever-vodka drinkers. Marketing, man.

I think there's an awful lot of "you get what you pay for" mentality at work here as well. As far as what do I overpay for? As it turns out, everything (stupid retail markup). Seriously, though, I usually pay more for certain grocery items. Even with Mo's discount, I overpay for hair care products. Surprised? I didn't think so.

costco has a giant bottle of grey goose knock-off for 30 or 40% less.since I never sip vodka the taste doesn't really matter, so the distinction is the amount of hangover or headache afterwards, but that depends on a person. i draw the line at plastic bottles, i will not buy vodka in plastic bottle no matter what it is

Steaming Bowl - usually with grocery items, you have the benefit of the experience of trying the various options at your disposal. Not to say that premium pricing doesn't come into play in some cases, but usually you know what you're paying for. Things you don't purchase often--TVs, mattresses, cars...how do you even begin to make a decision on those?

(And ever notice how those are the only items with commisioned sales people? That's no coincidence.)

m.v. - Thanks for the tip. I've found that your method for buying vodka is a quite valid one; I'll never touch Viaka again!