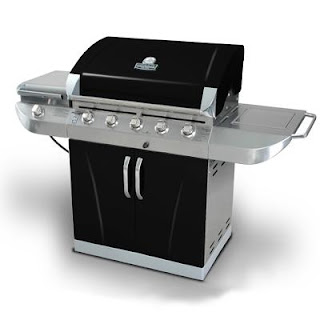 There it is.
The Char-Broil Quantum Commercial Series 5-Burner Infrared Grill.
For Christmas, my fiancee gave me a grill cover and a note telling me I could purchase any grill I wanted at Lowe's.
After some shopping/deliberating, I decided on this beast. After some crappy weather/scheduling conflicts, I finally got to fire it up last night.
The main cooking surface, which could more aptly be measured in acreage than square inches, has five burners beneath it. There is also a heavy-duty side burner with a griddle so all your cooking can be done outside during those hot summer months. There is ample storage as well, both to the right of the grill and below.
I turned everything on high for about 20 minutes to burn off any dust/oil residue. In the meantime, I used a normal non-stick skillet on the side burner to get the rest of the meal started. I threw a couple chopped slices of bacon in to start, which revealed the first advantage of the side burner: I don't have to care about tiny splatters all over the range or flooring in the kitchen.
Once that got going, I added some potato wedges to give them a nice crisp skin. After they were crisp, I removed the potatoes, left the bacon, and added garlic and spinach. Once it wilted I added a splash of balsamic and salt and pepper.
Now for the fun part. I had a couple small top sirloin steaks ready to go. I threw them on the grill, which was reading over 600º.
Seriously.
They seared beautifully, and the grill turned even a fairly cheap cut of meat into a real treat. It was super juicy and tender even though my steak got cooked a notch past medium. I can't wait to start experimenting with wood chips and indirect grilling.
We were giddy eating all three dishes. The bacon fat provided a great taste to the potatoes that you just don't get from the olive oil I normally use in the kitchen. The spinach was delicious as well with a bunch of really great flavors.
I shudder to think how many propane tanks I'm going to go through this summer.
Posted by JJSKCK at Tuesday, March 17, 2009

Email ThisBlogThis!Share to TwitterShare to FacebookShare to Pinterest
Labels: food

You will be shocked by how much propane you use. But it's so worth it. I have one very similar to yours. I never use the side burner for some reason but I like knowing I have it.

And the pussification of America continues.

Bull-
If yesterday was any indication, I will have no issue with burning through some propane. Compared to what I was cooking on, it will be like going from a Geo Metro to an Escalade--in both fuel consumption and results.

Craig-
Yeah, 600º+ is for wimps. I'd better check to make sure both of my testicles actually descended at puberty. In the meantime, are you done with that Mamma Mia DVD I loaned you?

You know who uses charcoal? My wife's jackass brother-in-law.

I don't care about your propane consumption as long as I can get a cat-free invite to join you some weekend. I'd even be willing to spring for beverages.

We'll just have to wait until it's warm enough to spend most of the time outside. We can even build a bonfire so Craig can be manly and roast/cremate a goat or something.