We’re heading up to the Twin Cities this weekend to see the northern outpost of our family and knock out some overdue IKEA/Trader Joe’s shopping.

Every time I go up there I find a reason I would love to live there. Before I leave I inevitably see something that confirms I’m just fine right here, thankyouverymuch.

First off, if you haven’t been, it’s about time you went—it’s a fun place. It’s a straight shot right up I-35. It only takes about 6-1/2 hours from KC if you keep yours stops brief.

The metroplex is larger than Kansas City by a good 60%. In turn, they have many more options for shopping, restaurants, music, theater, sports teams, and other things that generally make a city desirable.

The population is well-educated; this is to be expected in a city that contains one of the five largest colleges in the country (the University of Minnesota). I’m usually taken aback by how kind people are there. “Minnesota Nice” is not an ironic concept.

By the end of each trip I’m reminded:

The largeness of the metroplex also means it is far more difficult to get around. The traffic snarls are nearly constant, exacerbated by seemingly never-ending construction projects.

The cost of housing is much higher there. Yes, this is what happens when you have a desirable place to live, but I like having an affordable mortgage payment. (Wages are only slightly higher there.)

And then…there’s the weather. On average, it is FIFTEEN degrees colder there than in KC from December to February (and this is the warm part of Minnesota we’re talking about). Think about how you feel on a cold, windy January day in KC…now subtract those 15 ticks off the thermometer. Yeah. The ground is frozen for months.

To be fair, a hot summer there is far more pleasant than a hot summer here. They average 8 degrees cooler temps from June to August with far less humidity.

However, I remember walking two blocks from a bar to our car a couple winters ago. It was a windy night, and my fiancée was almost painfully uncomfortable. She said something to the effect of “this is ridiculous and please remind me of this if I ever mention moving back here”.

I told her, “The bad part of all this? This isn’t even THAT COLD for Minneapolis.”

Email ThisBlogThis!Share to TwitterShare to FacebookShare to Pinterest
Labels: travel

Email ThisBlogThis!Share to TwitterShare to FacebookShare to Pinterest
Labels: baseball

I'm looking to someone who keeps up on these things better than I:

Have you heard anything new about the progress at Dead Canary Brewing or Doodle Brewing?

For those who don't know, Dead Canary was started by two women who work at Flying Saucer and have done extensive homebrewing. According to their blog, they have built a space in the West Bottoms that includes an upstairs taproom and dodgeball/beer pong facilities.

They've met with Adam Avery of the badass Avery Brewing Company to discuss both the beer and the business side of things. Unfortunately, that was in January - and that was their last post on the blog.

As for Doodle Brewing, a former 75th Street brewer who has worked in the craft beer industry for over 6 years (including a stop at Harpoon in Boston) planned to open a brewery in Liberty.

Doodle's blog hasn't been updated since July 24th, at which point he was fully financed, construction was 99% done, test batches had been approved, and he hoped to have beer for sale in KS and/or MO by August.

Any news on either of these ventures?
Posted by JJSKCK at Tuesday, November 10, 2009 7 comments:

We spent the morning exploring the east end of the South Rim, where the overlooks are farther apart and a car is required.

We were amazed by all the different languages we heard in our time there, as people from all over the world were drawn to visit. It drives home how truly unique and renowned the Grand Canyon is.

A few more photos, some of which show the Colorado River thousands of feet below: 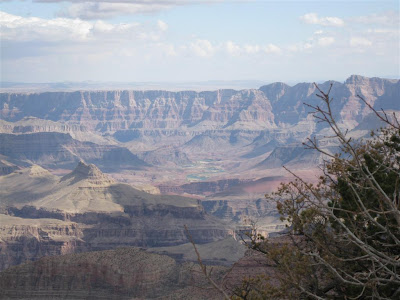 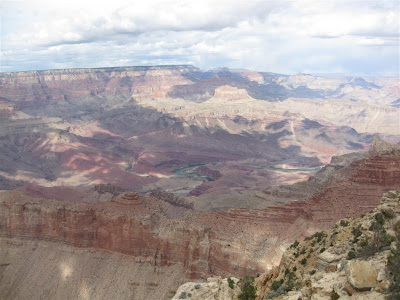 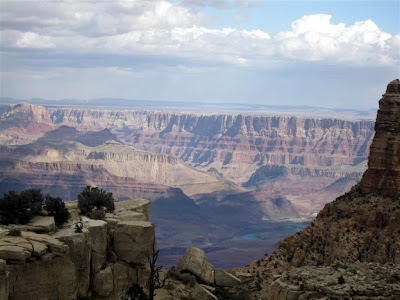 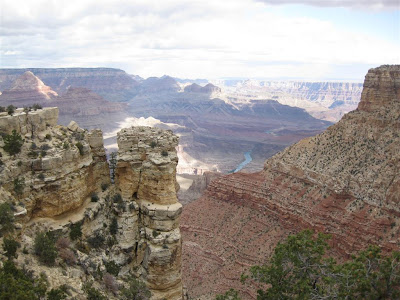 We traveled the entire length of the highway to the east entrance of the park (some 20 miles), and as we turned back it began to rain a bit. We made it back to where we started, and before we left the park we pulled over to get one last look.

Here's what we got: 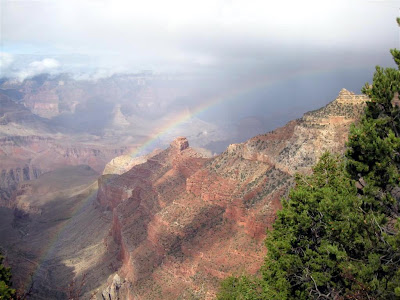 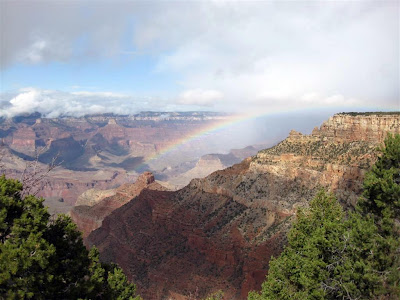 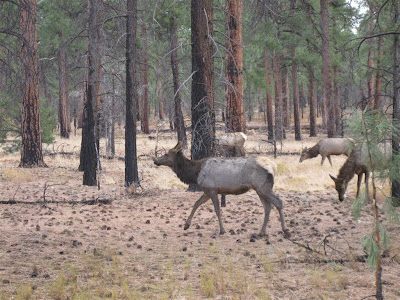 We're thinking we might go back someday.
Posted by JJSKCK at Monday, November 09, 2009 2 comments:

Our second day at the Grand Canyon would be one of our most exhausting in recent memory. I mean this in the best possible sense.

We chose to take a day hike, descending on the South Kaibab Trail into the canyon. We weren't sure how far we would go; we decided to see what "felt" right.

The trailhead is at an elevation of 7200 feet. The Colorado River is at 2500 feet. Translation? The trail tends to look like this: 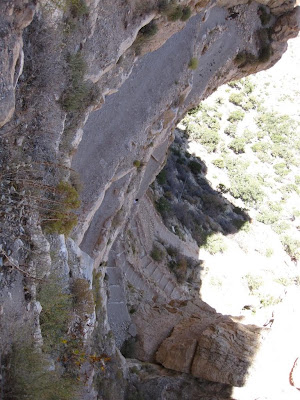 The views were absolutely amazing, though: 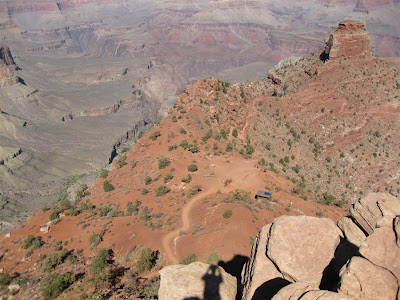 This was our view for lunch: 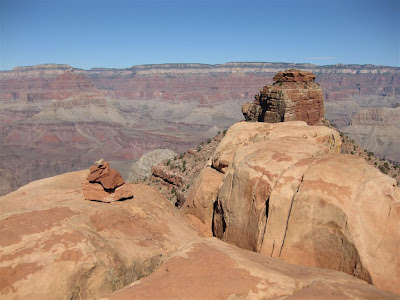 We descended further, until we turned around and saw how far we'd come (gulp): 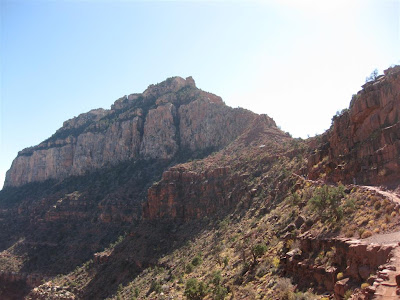 Yes, we had to make it all the way back to the top, so we figured it was time to turn back.

The downside of hiking into a canyon is that the hard part comes LAST. You're already worn out from coming DOWN the rocky trail, and two and a half hours later you realize you've descended something like 1500 feet.

Now, consider that you're still at almost 6000 feet altitude, and...well, your midwestern lungs just aren't happy with you. We had to stop about every 5 minutes on the way up and take a serious break. We recovered fairly quickly, but we couldn't go far between breathers. Looking back to see how far we'd climbed kept us going, because the canyon rim never seemed to get any closer. 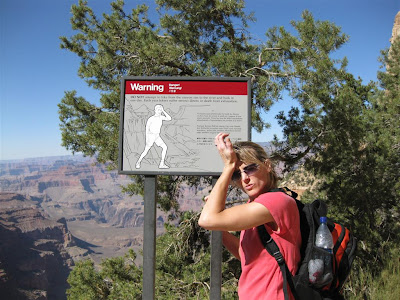 To give you some perspective, here's a view of the ridge we traversed: 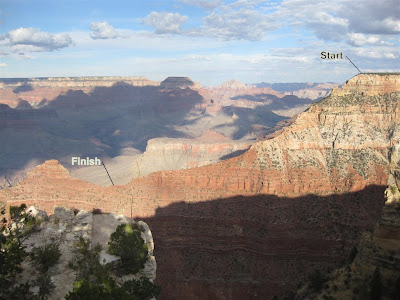 We celebrated with some haute cuisine: 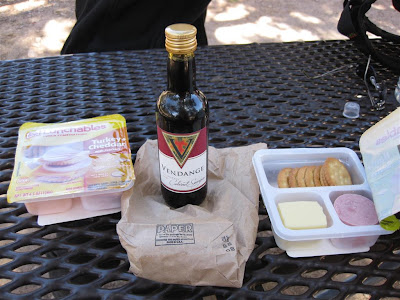 After all this, we still walked another several miles (on level ground, thank you) to take in more of the views. We were absolutely beat, and we gorged on pizza once we got back to the hotel.

I'd do it again in a heartbeat.
Posted by JJSKCK at Saturday, November 07, 2009 No comments:

I landed in Vegas at 10am; my fiancee didn't arrive until 8pm as she was flying in from Boston. After a quick spin down the Strip to see what was in store for us later in the week, we got to our brand spankin' new Comfort Suites to get some sleep before our road trip.

About 30 miles south of Vegas is the Hoover Dam. Many statistics are thrown out there about the enormity of this thing. My two favorites are:

1. The dam was finished in 1935. Some concrete deep in the heart of the dam is STILL curing.

2. The dam contains enough concrete to build a 2-lane highway from San Francisco to New York.

It's big. Them are cars up on top. 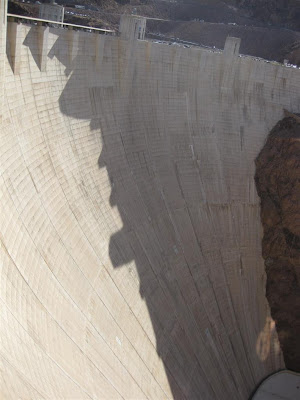 I pushed our rental Sonata pretty hard; we didn't see the legal side of 90 mph for much of the trip. The speed limit was 75 and we were mostly just keeping up with traffic, so I didn't feel I was being reckless or anything.

The scenery through Arizona got progressively nicer as we approached the highway that would take us to the south rim of the Grand Canyon. We got to our Best Western (quite nice - I would recommend it), relaxed for a moment, then made our way into the park.

There are no words to adequately prepare you for the first time you walk up to the rim and see the vastness and colors and shapes come together. There are no pictures to do it justice, which doesn't stop me from posting some anyway.

You really have to go. Everyone should see this at least once in his or her life: 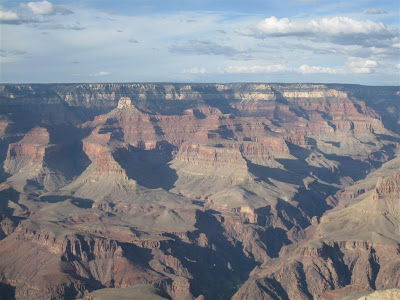 Here are the layers of rock, all of which are exposed at certain points in the canyon: 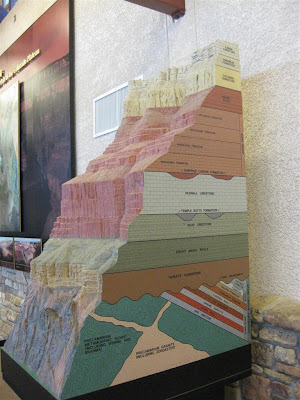 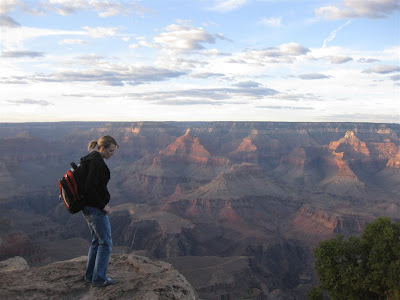 You must see the canyon, especially at sunset: 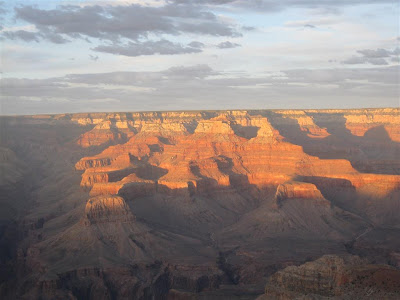 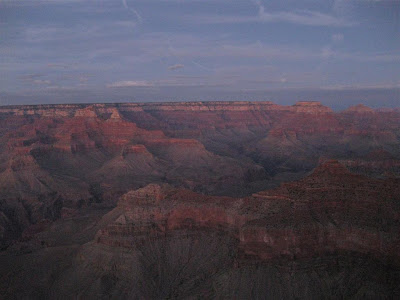 We finished our evening with a lovely meal at El Tovar, a lodge next to the canyon that was built in 1905.

Check out photos of the event here

IMO, every course and pairing was a hit. Just look at the pictures...your eyes will agree.

I've already got tickets for December, where some of the beers on the menu include McCoy's Winter Warmer, St. Bernardus Abt. 12 (a quadrupel and part of the beer cycle), Samichlaus (with which a Foundry bartender once tried to kill me, and a special Christmas treat from Boulevard (it's a secret!).

Thanks to N & D for attending, and it was nice to meet with owners, chefs, brewmasters, and bloggers (LC, holla!) who made the event possible.
Posted by JJSKCK at Thursday, November 05, 2009 3 comments: