Alan Scherstuhl, Pitch theater critic extraordinaire and author of the always-entertaining Studies in Crap, presented his readers with a challenge.

His subject this week was a school autograph book from 1946 that he found in a thrift store at 63rd and Troost. The book itself did not provide enough information to indicate its school of origin.

The devoted Crap Archivist enlisted us readers to track it down using only a 60+-year-old-photo, the cryptic caption “PS 30 Richmond”, and the assorted names of classmates.

After a couple dead ends, I managed to eliminate a few possibilities. A few clicks here and there led me to some viable addresses. Then, thanks to Google Maps Street View, I was able to find a photo taken at almost the same angle as the archive photo: 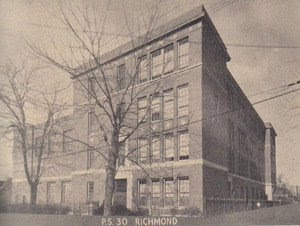 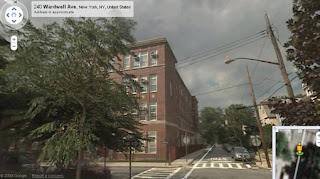 Mystery solved. I wish I could make a living doing stuff like that full time, especially when I get a write up calling me both “intrepid” and “celebrated”.

Big ups to Alan for such a fun project. Check out his articles in both the print and online versions of Pitch.
Posted by JJSKCK at Friday, March 06, 2009

Does the Crap Detective serve on the Karma Police force?