I’ve been thinking about how to write about this amazing trip.

The simplest way would be to give a list of all the things we did, journal-style. But that would be dry, and I feel like the trip was a week-long experience rather than a series of events. Therefore, I decided to write about general topics…Irish Style!

Once the trip was booked, one of my few worries involved how I’d cope with an 8-hour trans-Atlantic flight in coach. I’m 6’4”, and I’m certainly not on the slender end of the spectrum. I have never once been able to fall asleep on a plane*, and this flight was no different, which kinda sucked because it was an overnight flight...and we would arrive in Dublin far too early to check into a hotel. It made for a rough first day, but I digress.

*There are a couple exceptions, but they both occurred when I had a whole row to myself on a Southwest flight and I curled up in the fetal position. Even then, it wasn’t great, and I woke up with the impression of a seatbelt buckle on my face.

Just sitting on a plane for a couple hours makes me altogether irritable. The seats just aren’t contoured for people like me. Plus, I get bored easily and get hungry/thirsty often.

That's what made Aer Lingus a nice surprise. First off, we could each check two bags at no charge. We only had one true check-worthy bag between us, but we went ahead and checked 3 bags because we could.

The seats were pretty roomy for coach, even with the guy in front of me reclined all the way. Sure, you have to get up and stretch every so often, but I wasn’t all that uncomfortable. 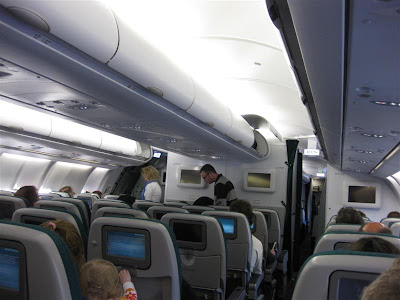 Part of that is because I didn’t have to read (which absolutely kills my neck on a plane) to keep myself occupied. The in-flight entertainment system was fabulous. We had about 16 movies at our disposal (each way, mind you—they changed them on the way back), plus an entire season of 8 TV shows (Mad Men among them), and about 300 CDs. They also had about 50 video games, including Centipede, Missile Command, and bar-style electronic trivia that you could play against the other people on board. All on demand, whenever you wanted them. Which is good when you keep taking a few minutes to try to fall asleep and keep giving up.
Between the flight there and the flight back, I saw 3 movies and she saw 5. I was a little more into the games and music. Morbid curiosity made me listen to a couple tracks off this (it was strangely enjoyable): 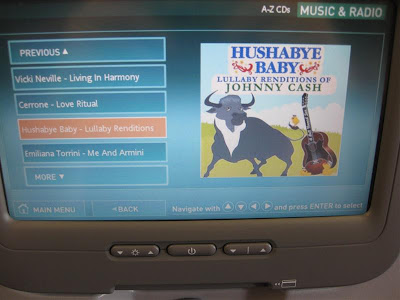 From a food standpoint…we had the hookup. They fed us a snack and a drink as soon as we got to cruising altitude, then they served us dinner—a full dinner with salad, bread, pasta, cheese, and cheesecake. It wasn’t Justus Drugstore by any means, but it wasn’t bad either. It was certainly more than I expected. They came by and gave us coffee or tea about 6 times, and they let us get up for more at our leisure. Then, to top it off, they served us breakfast—a hot ham and cheese croissant, potatoes, and a small pastry. Service was similar on the way back.

None of this cost anything, by the way.

And that’s kind of the point of this post.

On our roundtrip flight from Chicago to Dublin, the two of us received a combined 8 baggage checks (we only used 6), 8 meals, unlimited use of the entertainment system, and unlimited soft drinks.

We flew United to get to Chicago. The same things we received free of charge on Aer Lingus would have cost us $108 each on United. (Or $137 on US Airways, who charge for movies/headsets/soft drinks.)

I always wondered why on international flights you are treated like a person and on domestic like a piece of luggage. the prices definitely don't reflect that. i had the same experience more than once:coming off the international flight and getting back on AA.

Interesting, isn't it? It's obviously gotten worse domestically in recent years. We were a bit worried because the reviews we read about Aer Lingus was that it was average and no-frills...maybe that applies more to their short-haul flights within Europe, or maybe European travelers are spoiled, but I can't say enough nice things about our flight across the ocean.