Saturday, I watched Gran Torino for the first time. I know; I’m a bit behind on my flicks.

If you haven’t seen it, Clint Eastwood plays a growling, bitter, bigoted, recently widowed veteran of the Korean War. He lives defiantly in his longtime home as the neighborhood around him falls into blight and becomes an incubator for gangs of all ethnicities.

Sunday, I went to my parents’ house to celebrate my brother’s birthday. While the old neighborhood has not declined to a Gran Torino*-esque level, the movie made me a bit more aware of the signs of decay than usual. It has certainly seen better days.

*Incidentally, my parents' first car that I can actually remember was a 1975 Gran Torino. It was white, with leg-burning dark blue vinyl seats. It was also adorned with a "George Brett for President" bumper sticker, distributed during his MVP-winning 1980 season when he hit .390.

Most neighborhoods, when transitioning from "working class/blue collar" to "poor", display common visual attributes. The old guard--generally long-term resident, empty nest couples in their 50s or older--still keep up their properties: 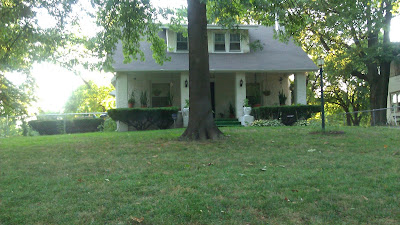 The old guard knows, deep down, that the neighborhood is going to shit. But just as people can ignore--or really, rationalize--the two nuisance pounds they gain every year, they do the same with the slow, gradual decay happening around them: 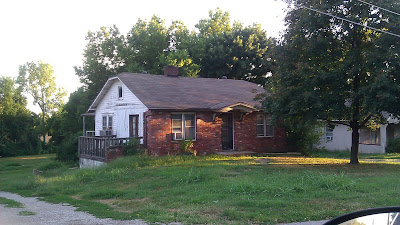 It's easy for the old guard to ignore a house like this (the rotting siding and unkempt yard look worse in person than in this picture). It keeps them sane, keeps them rooted in place, keeps them from ruminating on the herculean task of relocating all the possessions and memories accumulated over a lifetime.

Then you see this, which shockingly was occupied (as of last month, at least): 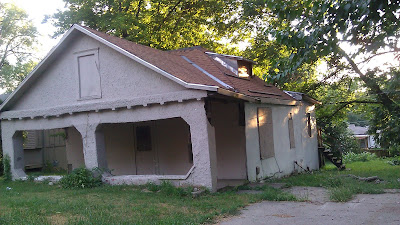 Each of these houses is less than 1/2 block from one another.

For me, distance equals perspective. I hadn't driven down most of these side streets in well over a decade, and it really opened my eyes. The places where I used to happily ride my bike were now...seedy. A little creepy. And more than a little sad.

The baseball fields where I spent countless summer nights as a player and spectator have been abandoned for years, victims of hard times and a general decline in baseball interest among urban kids: 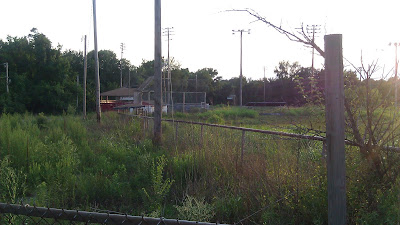 This photo is a bit of a non sequitur; I just found it funny and appropriate to see a "watch for pedestrians" sign on a narrow street that, like nearly all KCK streets, has no sidewalk. 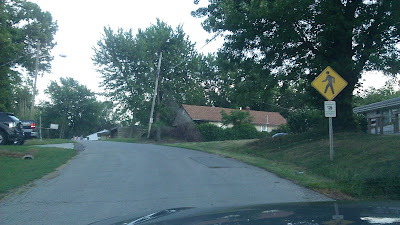 Just down the street is a strip mall that has been dying since I was 10. Among other things, it housed a TG&Y when I was young, where I'd buy cheap blank cassette tapes and baseball cards. Now the only activity is at Family Dollar and the tiny liquor store. There's also a health food store that appears occupied, but mostly it's just empty, vandalized space: 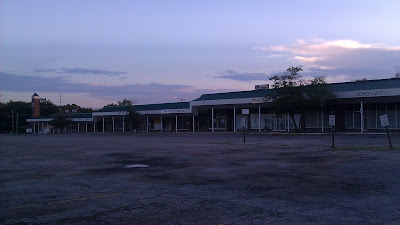 Demographics in the area dictate that when there is new construction, instead of a half-decent grocery store, it's a Dollar General (sorry for the blur). For the 7 things you can't get at the aforementioned Family Dollar, naturally: 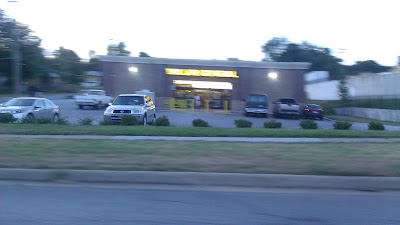 I don't have much of a comment, the situation is even worse outside of the metro area. Gran Torino is a great movie.

Wow, how depressing. I can't disagree however.

A few weeks ago, I took my son and his girlfriend to a Royals game. On the way back we took a trip down memory lane for dad and drove by Sumner.

After that trip and now your post, I don't think I'll ever make my way back to the old neighborhoods or the baseball parks you describe, which is actually the saddest part for me.

I grew up near 51st and Kimball, in the Welborn area. I can't tell exactly which streets the houses you've shown are on, but they look familiar. A grocery store has returned to the area at 55th and Leavenworth Rd. It's very clean and decent, well-run. I think they've even sourced the kids who work there from out of the immediate area. The store is nothing fancy, doesn't have a deli, etc., but it's clean and well-run. The entire area seems very "country", even the blacks. But then I think Quindaro seems rural.

I've run into this page again...

I'd like to add that while I certainly agree KCK has gone from a decent working-class/blue-collar place to largely ghetto/suburban ghetto/borderline ghetto, what you've said about Sunset Plaza above is not true. It's not exactly mostly empty and isn't being vandalized. It's busy everyday. There's a bank, Family Dollar, hair care, police station, health store, convenience store, and a couple of other places.