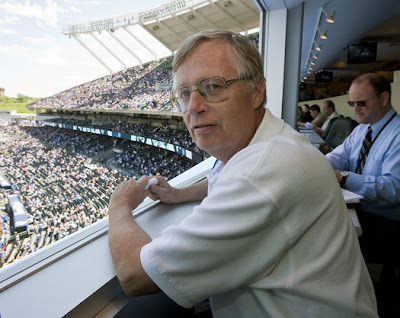 I have been a Royals fan since I was too young to pronounce my W's (my favorite 2B was Frank "Right"). As I sat in front of the TV for nearly every Royals road game, I learned before I was even in Kindergarten that the answer to my mom's nightly question--"what inning is it?"--was always "8th". A lower number meant she would make me go to bed, but a game in the 8th was close enough to ending that I could stay up a little later to see the conclusion.

I say this just to establish that Paul Splittorff has always been a part of my summers, from his days as a pitcher to the last 24 years as a broadcaster.

He epitomized hard work and getting the most out of one's talents.

He is known as extremely generous with his time and knowledge.

And the next time I hear someone say something negative about him will be the first.

I didn't realize how much I'd miss him--his voice, his contributions, his presence--until he was gone. Word spread of his grave illness last week, but it didn't hit home until now.

He was a Royal from day one (drafted before the Major League team even existed)--a link to the glory days.

I can think of no finer, more honorable ambassador for a baseball franchise than Paul Splittorff.

Email ThisBlogThis!Share to TwitterShare to FacebookShare to Pinterest
Labels: baseball, rest in peace