Kansas City and The United States of Tara

When we switched TV providers last year, one of the promos was the inclusion 3 months of HBO and Showtime for free.

It worked. We got hooked on shows from both networks.

We've been catching up on The United States of Tara ahead of its 3rd season premiere next Monday. 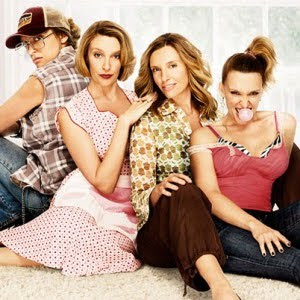 The show is about a suburban family of four. The wife (Tara) suffers from Disassociative Identity Disorder, which you probably know better as Multiple Personality Disorder.

There are at least 6 "alters" that have been introduced, each of which brings some semblance of levity, comic relief, or discomfort to the show's other characters.

One of the most striking things to me is that fact that the show is set in Overland Park. And the references are spot-on, both in terms of Kansas City and the Johnson County/suburban dynamic.

-The husband gets arrested, and the cops tell Tara that they're taking him to the County Jail over in Olathe.

-A creepy 27-year-old starts dating the teenage daughter, and he offers to buy her "a loft...in the Crossroads District."

-The teenage son (who is gay) and a friend drive to a park. The experienced friend wants to show the son how to cruise for sex. In an obvious reference to Penn Valley/Liberty Memorial, the son says, "Yeah, I've been there plenty of times, but just for school. You know it's the only dedicated World War I Museum in the country?"

-After Tara and the husband argue, the teenage son says he's keeping the house in the event of a divorce. He adds that he can't change schools because "Shawnee North has gangs."

(This one is especially true-to-life: when the Shawnee Mission School Board was going through their redistricting plans back in September, some students at one of the elementary schools that feeds SM Northwest High School were going to be reassigned to Shawnee Mission North. Parents went apeshit, going so far as to claim their property values would decline by 20% and ultimately cost the district money. It's funny because they're using typical suburban denial in lieu of admitting the real reason: more poor and minority students go to SM North, and that's scary to them.)

In trying to figure out how this came to be, I found an old article from Aaron Barnhart:

"We have someone working on the show who's from Overland Park, Kansas," said [show co-creator Diablo] Cody. "She said that everyone out there hangs out at the Ken-Taco-Hut."

That someone, Lindsey Allen-Springer, is the manager of development at DreamWorks TV, which is producing "United States of Tara" for Showtime. It was DreamWorks co-founder Steven Spielberg's idea for a comedy about a woman with DID, or dissociative identity disorder, that Cody developed into this series. Allen-Springer, originally of Olathe, is a 2002 graduate of K-State.

So there you go. If you have a chance, check out the show. It is alternately hilarious and heartbreaking, and always interesting.
Posted by JJSKCK at Thursday, March 24, 2011

Email ThisBlogThis!Share to TwitterShare to FacebookShare to Pinterest
Labels: tv

Well they might make a couple references to Kansas City, but they do absolutely nothing to make it look like Casey and there's obvious obviously are all the time that show that it's in California. Overall it's pretty stupid like one line saying it's at downtown Kansas City area code. or when they refer to a road with the in front of the number...