A few more beers to get out there:

The first Ska beer I had was their Red Ale, and it was utterly boring. Never one to give up on a brewery for one crummy beer, I picked up a six pack of Modus Hoperandi. This is a good IPA, though I’ll admit I can detect no subtlety in that style of beer. They all taste roughly the same to me, with some being weaker and not-so-good (Red Hook, Tallgrass) and others being bigger and more flavorful (Bell’s Two Hearted, Great Divide Titan). This beer falls into the better side of that comparison. You could put Titan, Modus Hoperandi, and Lagunitas in front of me and I probably couldn’t tell which was which. It’s better out of a glass (naturally), but isn’t too shabby out of a can either. The can makes it a good choice for tailgating or float trips. $7.99/6 pack CANS

The Ten Pin Porter is a good beer, but just an okay porter. I like a balanced porter, and this one fits that bill. Some malt sweetness, some coffee and chocolate notes, some hops. Definitely worth a try in a make-your-own sixer application; not worth an entire sixer when there are so many better choices out there (including Bell’s, Anchor, Founders, Bully!, Cutthroat, Avery…). $8.99/6 pack

I’ve found that a hoppy red is one of my favorite summer beers, and this one does not disappoint. It’s a nice-looking amber/red color. The taste starts nicely balanced (not sweet, not bitter) and finishes with a crisp, dry hop flavor. Hence the name. This one is a good beer…but if you like this style and can still find Odell Red (it was a late spring seasonal), do that instead. I slightly prefer the Odell anyway, and it was selling for $8/six pack while I paid $12.49 for this Rogue.

Speaking of Odell, their summer seasonal is out now. St. Lupulin is an “Extra Pale Ale”, and it’s delicious. Hoppy, with an interesting lightly sweet (but not overwhelming) flavor. It’s not a sweet beer by any means…I can’t figure out a good way to describe it. It’s a Pale Ale with a little something I can’t quite identify. Bull @ KC Beer Blog did a nice back story to the beer last week. I had it on tap at Barley’s a couple weeks ago, and Dish Pizza in Liberty carries it (though I may have had their last bottle Tuesday night). $7.99 to $8.99/6 pack 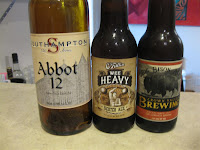 I drank a bunch of good beer when I was in New York last month, but I haven’t bothered reviewing any of them because I made it a point not to drink any beers you can get in Kansas City, and why should I just brag about all the stuff I got to try that you didn’t? Well, I’m making an exception for Southampton Abbot 12.
I was in Manhattan for a training/licensing seminar the week after Memorial Day. My wife came along so we could do some vacationing as well. While I was there, my company called and informed me I needed to stay there to audit a school district. This left me with a good part of the weekend to kill by myself, so I drove out to Southampton Public House, did a beer sampler, and picked up a couple 750ml bottles to take home.
One of these was the Abbot 12, a quadrupel. It looked amazing, smelled amazing, and tasted PHENOMENAL. When my wife and I took our first sip, we looked at each other and just gave each other the silent “whoa” expression. Two more sips in, and she was getting sad because we couldn’t get the beer in Kansas City. This beer was just stunning. Caramelly, a little spicy, a little…figgy? Very complex and interesting. A wonderful special occasion beer; truly one of the best beers I’ve ever had. TRY IT if you have a chance. $12/750ml bottle

My wife was saddened by the bottle’s emptiness: 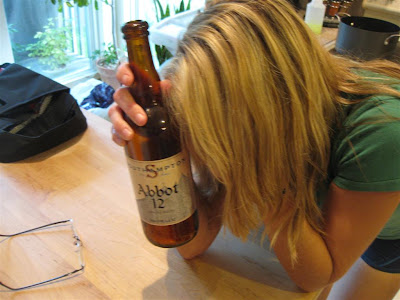