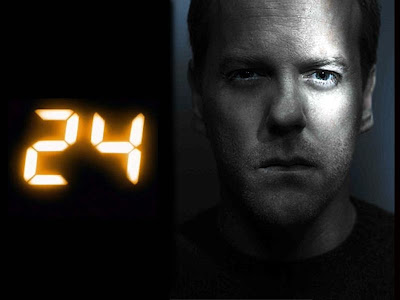 I have watched the show from the beginning, intrigued by its gimmick: 24 one-hour episodes, ostensibly in “real time”. I was hooked immediately.

The suspense, the twists, the doublecrosses, the assassinations…I’ve seen them all. I’ve lived through both of the Palmer administrations. President Logan’s impeachment and fall from grace. President Taylor throwing her punkass daughter in jail. Dennis Hopper with a horrible Russian accent. And yes, Jack's daughter getting caught in a friggin' BEAR TRAP.

(Honestly, this last thing was probably the best thing they ever did with Elisha Cuthbert's character. The most common refrain among 24 fans was how dreadfully annoying Kim Bauer was.)

At its peak, the show became a huge hit. I was something analogous to the hipster who “discovered it first”, though I never abandoned the show when it became popular. There were just more people to discuss it with.

Interestingly, the writers of the show do not write the entire season at once. They write some storylines, shoot episodes, then make decisions from there. This stemmed from the first season, when the creators weren’t sure whether the show would catch on or if it would be cancelled at midseason. They had to have a contingency plan so they could tie the series up if Fox did not pick up more than the original 10 or 12 episodes.

Despite lukewarm ratings at first, Fox had faith in the show and its concept. It paid off in spades. Jack Bauer is now a pop culture icon; most everyone knows the name even if they’ve never seen a single episode of the show. Fox also figured out the best way to run a serial drama is nonstop: the last several seasons, the show has had a 4-hour Sunday/Monday kickoff with no shortage of action, thus getting people hooked. This was followed by a new episode every week without taking a break. No reruns, dammit.

To be fair, the show is a demanding one to follow. Like any serial drama, context and backstories are extremely important. Unlike Law & Order or CSI, an episode of 24 is not a story in and of itself. There is no beginning, middle and end wrapped up with a tidy bow at the end of an hour.

The show also requires a major suspension of disbelief. The world of Jack Bauer is a world where cell phones never die, one can get all the way across Los Angeles or New York in less than 10 minutes, big moments happen every hour on the hour, and there is nothing that a 5’-10”, 140lb. man can’t do; no one he can’t kill.

But damn, the stories are fascinating. My jaw still drops at least once an episode.

And although I will sincerely miss 24, I can’t wait to see how they go out tonight.
Posted by JJSKCK at Monday, May 24, 2010

Email ThisBlogThis!Share to TwitterShare to FacebookShare to Pinterest
Labels: tv

Right there with you. My attention to the television (divided evenly with the laptop) doesn't always serve me with shows like this, but I do love me some Jack Bauer.

That being said, they have to kill him off tonight. My theory: He'll sacrifice himself so nothing bad happens to Chloe—beyond that, I don't have specifics.

The only thing that makes me think they won't kill Jack is the persistent "24" movie rumor. Aside from that, yeah...there hasn't been a happy ending to a season yet. I really doubt cancellation is going to make the writers suddenly go all Hollywood on us.

I don't think the movie rumor is still a rumor. I saw Keifer on Ellen (shut up) and he was talking about it.

I'm watching the seasons on instant viewing for Netflix and Seasons 1 and 2 were crazy! It kinda seemed like Season 3 just kinda dropped me into the middle of things (even more so than usual) so I'm kinda taking a break, but it's awesome!

The 24 movie is confirmed; they were trying to keep it under wraps as long as they could so as not to ruin the integrity of the series finale. Your Ellen secret is safe with me.

Every so often I'll catch an episode of a prior season on FX, and I'll think, "Oh yeah...those are the Colombian drug lords who got Jack hooked on heroin!" It's just a fascinating show, and since my wife never saw the first few seasons I'll get to have fun reliving them.