We spent close to 12 hours in Westport Saturday, and I must say it was a lovely time.

12:45pm: Movie at Tivoli (Some Like It Hot). They are doing a "Movie and a Meal" promotion for the next three weeks - go see a matinee of Casablanca, Duck Soup, or Breakfast at Tiffany's, then take a coupon to just about any Westport eatery and enjoy a discount meal before or after the show.

2:50pm: Antiques store stop with aforementioned friend/archivist and his friend. He bought some more crap to archive; she bought a Luke Perry 90210 doll. Both left happy.

3:45pm: Stopped by the high-end kitchen store just north of the Riot Room to get ideas for our remodel that should take place any decade now, but we had to window shop because the place closed at 3pm.

4:00pm: Went to a very busy World Market to buy various snacks and miscellany for the family holiday visit.

4:40pm: Went to the Foundry, met up with good friends to have food, drinks, and candy.

Sometime around 8pm: First group of good friends dispersed for the evening, but second group began to form at the tables directly behind us.

Sometime around 9:30pm: I had consumed enough Winter Warmers to start talking a little too loud and a little too much. Who cares; I was happy.

Besides Swedish furniture, we also picked up some booze in Minnesota. Nationally, beer is distributed according to state laws, licenses, and proximity, so each state has a different mix of breweries from which to choose. Therefore, I knew what I had to do: go to Beer Advocate to research beer-friendly liquor stores in the Twin Cities area.

After weighing the ratings and geography, we decided to stop at Blue Max Liquors in Burnsville, near the I-35E/W split as you approach the cities from the south. It was a smaller store than I expected (rather cramped for space), but the selection did not disappoint.

In fact, I had a hard time deciding what all to purchase. After filling a certain beer blogger’s order, we bought a bunch of different stuff. Having heard all sorts of great things about Surly (mostly here) I knew that we would buy a 4-pack of each just to try them out. I’ve been very pleased with the smoothness of Bender, the peppery Saison(ish) flavor of CynicAle, and the hop blast of Furious. Haven’t tried the Coffee Bender yet.

Among other things we picked up (sorry the pictures suck):

Dark Horse “One”. Labeled an oatmeal stout ale, this stuff is syrupy. In texture and flavor, it is only slightly less intense than your average imperial stout. Very good. 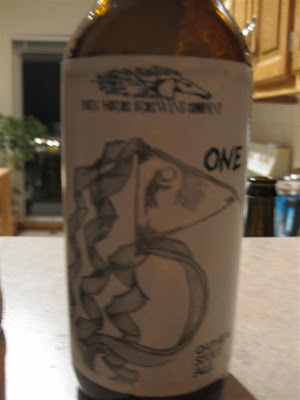 Brau Bros. Braun Ale. I liked this one too. Dangerously drinkable and tasty. A malty brown, not a lot of hop presence. 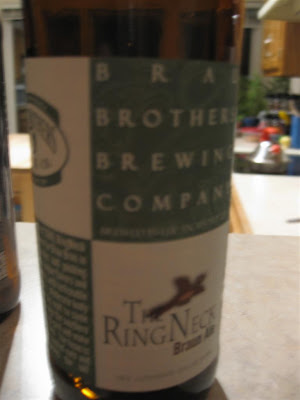 Gray’s BULLY PORTER. Really. I had to pick this up, for obvious reasons. Interestingly, it is on the opposite end of the spectrum from our hometown’s namesake. Whereas Boulevard’s version has a dominantly dry-hopped flavor, this one is a bit on the sweet side. It’s a nice beer. 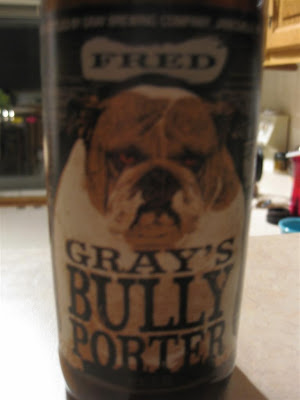 I picked up a bunch of other stuff too.

As I hauled the shopping cart to the register, I asked the fellow ringing me up how long Darkness (Surly’s Imperial Stout and one of the most elusive beers around) lasted on the shelves. The guy manning the next register said they received 5 cases (60 750-ml bottles) of the stuff at the end of October and sold it in 24 hours. I nodded my head and smiled, when suddenly my cashier told me to hold on for just a minute. He disappeared, and the other guy said, “I think he’s going to see Santy Claus”, in his Minnesota accent.

A couple minutes later, our cashier reappeared and said, quietly and secretively, “Do you want one? I can sell you ONE,” adding his index finger for emphasis.

He told the manager we were buying $160 worth of beer, so apparently we surpassed the secret Darkness threshold. I’m surprised no code words or secret handshakes were involved. It turns out they held a sixth case back for employees to sell themselves and potentially cellar for next year.

The manager then came out and said, “I also have some of this.” He held up a bottle of Life & Limb, a collaboration between Dogfish Head and Sierra Nevada.

“The state of Minnesota got 5 cases. I got one of them. Would you like a bottle?”

Referring back to the title of this post…our next stop was at Trader Joe’s. We bought a case (12 bottles) of wine.

No Three Buck Chuck either. We do draw a line somewhere; that stuff is awful. Especially when, for $2 or $3 more, you can drink a totally passable bottle of wine (at least for our apparently unrefined palates).
Posted by JJSKCK at Thursday, December 10, 2009 3 comments:

The next Red X Wine Tasting is 5pm-7pm TOMORROW, Thursday, December 10th. There will be pizza and perhaps more wine afterward in Parkville. It’s what we do. Read more here.
Posted by JJSKCK at Wednesday, December 09, 2009 No comments:

I have some catching up to do.

-The trip to Minnesota was a success. We got a metric crapload of stuff at IKEA, Trader Joe’s, and Blue Max Liquors. The rental minivan strained to keep up with the sheer mass and weight of all this tightly-packed, mass-produced Swedish goodness: 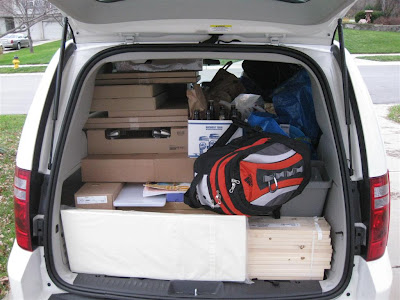 We got to see the Minnesota side of our family and spend a little quality time with everyone. It was really nice, the weather cooperated, and the Happy Gnome is a highly recommended stop for great food and beer—lots of local produce and a thoughtful selection of brews on tap.

-IKEA assembly was mostly a success. We bought a bedroom set for the spare room (bed + 2 dressers): 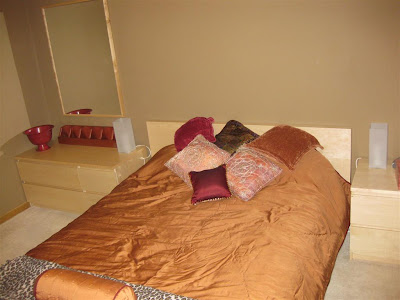 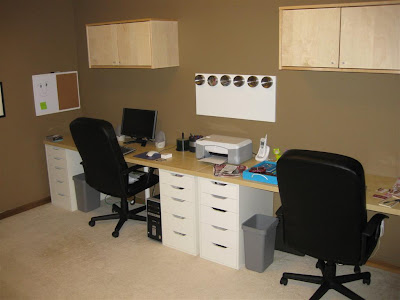 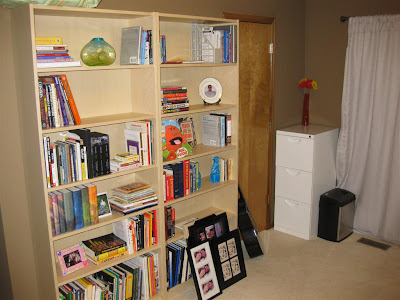 miscellaneous light fixtures and lamps (not pictured), and a TV "wall" for the living room.

Everything went smoothly…except the TV stand portion of the wall. Here it is after I assembled it the first time: 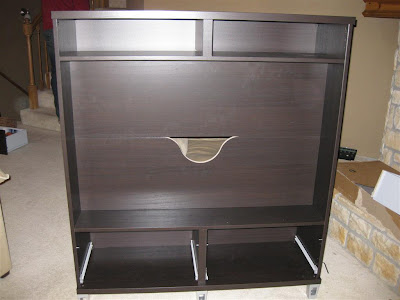 The furniture was listed as 15-3/4” deep on the box, website…everywhere. The problem is that the shelf the TV is to sit on is only 7” deep. Even the stand for a flat screen is considerably bigger (ours is about 12” deep). There is no mention of this anywhere. The only way for anyone to use this furniture as intended is to mount the TV directly onto the back of this shelf as if it is a wall. The problem, of course, is that there is also no mention of this fact ANYWHERE. Worse, it would require 2 additional rails, which of course would require another visit to IKEA or a huge shipping fee.

We decided to improvise instead. She used a router to cut a hole in the bottom of the board that would be behind the TV. This would allow us to slip the TV stand below it, mostly unnoticeably. 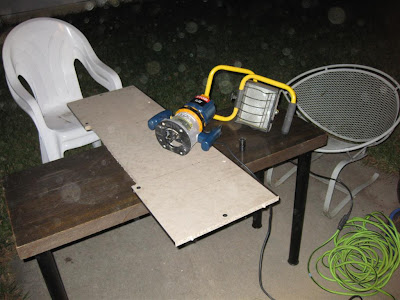 Of course, this unique, contoured board with specially-measured holes and couplings then fell to the ground and snapped in two.

The next day, she bought a bracket at Home Depot to repair the board, at least enough so that we could be done with it. We also had to make holes in the board for wires because they stuck too far out of the back of the TV. Fortunately the TV itself hides all this: 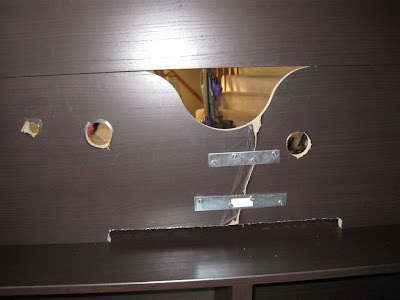 End result, with side elements added: 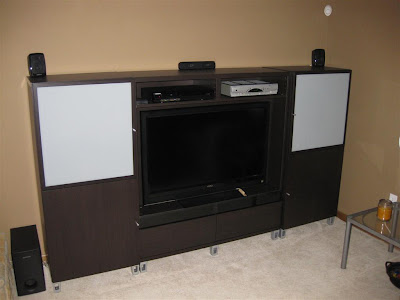 Honestly, it looks great. That said, you may want to stay away from the Besta line @ IKEA. We’ve now had two major problems with products in this line, and being so far away from a store it's not easy to resolve them.

More to come (about things other than IKEA) once I find the time.
Posted by JJSKCK at Tuesday, December 08, 2009 4 comments: